Adventure is a word that kindles so many different feels.

Do you think of exciting, crazy experiences? 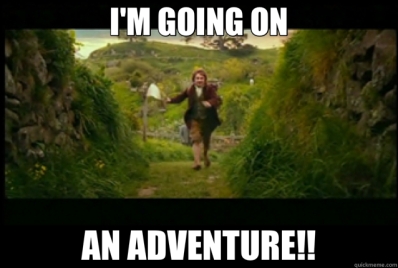 Or the word you use to laugh off unfortunate events? “We finally got some gas in the car and then a mile down the road we blew a flat tire! Ha! It was quite the adventure.”

Adventures are unusual and exciting. And typically hazardous.

Going on an adventure is usually in unexplored territory.

Adventure is never promised to be secure or safe along the journey. It’s full of laughter, tears, and surprises.

Adventures cannot be planned (at least not to the T), or controlled, or predicted. But adventures happen for a reason.

Waiting for the Expected

There was a man who lived a long time ago who set off on an adventure which at one point along the way, included him having a disease for thirty eight, long years.

Hopeless and in despair he had his family take him to the local pool where he was laid down beside many friends and neighbors who were blind, deformed and crippled.

For they knew that if they waited long enough, an angel would come and trouble the water in the pool, and the first person to step in the pool after the water was stirred would be completely healed.

Talk about a miracle cure.

The man dreamed of being the first to step foot into the pool. When he closed his eyes he could imagine the air going still around them, like a hush in the wind. A ripple of water would start in the center of the pool and people would scramble for the edge, but he was already sliding in and suddenly engulfed in water. Both feet on the pool’s bottom he would stand, water dripping from him and he would breath in and feel strong and whole.

It was his favorite and only dream. However there were two problems.

He was never the first in the pool. His weak attempts would get him a foot closer to the pool when he’d hear a healed person’s joyous voice ringing through the porches open walls.

He’d fall back on his thick rug, woven by the hands of his mother and feel the throb of the raw skin on his arms, dripping with fresh blood from his struggle across the rocky ground. All that was left was to squeeze his eyes closed until the tears cleaned his dusty cheeks.

His second problem was that there was no one there to put him in the pool. He couldn’t even get there on his own. He was weak and useless. His sister would sit with him for hours each week, but the angel must be displeased with him, for he never visited the pool while his sister was there. Not that she could help get him there in time, for she was small in size. However her enormous heart for her brother was the only thing that kept him hoping.

“It’s alright,” she would say while smoothing his greasy hair away from his sweaty face. “You’ll get in that pool and live a normal life, just like you’ve always dreamed.”

Just one glance at her bright smile and he was sure she was right. The pool was all he needed. It would save him.

One day, the heat particularly intense, the man lay with his eyes closed on his rug. His sister had just brought him some bread, which he’d devoured. Begging hadn’t brought him the largest meals that week.

He flopped his arm over his face, shading his wrinkled skin from the sun’s scorching rays. The angel hadn’t touched the pool in a few weeks. He was expecting it any day, yet it’d been so long…

A cool shadow fell over the man’s face and he peeked over his withered arm. A bearded man peered down at him. Over his shoulder a few other Jews dressed like this one talked among themselves, keeping their distance from the lame and diseased.

The man turned his attention back to the bearded man before him. Above his scraggly beard, lines creased around his kind eyes.

“Wilt thou be made whole?” he asked.

The diseased man stared into his eyes that seemed to dance with amusement. “Sir, I have no man, when the water is troubled, to put me into the pool. But while I am coming another comes and steppeth down before me.”

This made the bearded man smile wide. “Rise, take up thy bed and walk.”

The diseased man inhaled at the strange words and he was filled with a rush of strength he hadn’t felt in years. What was that? He pulled his hand before his face. It no longer appeared weak and sickly. It was of good color and strong. He closed and unclosed his fingers. Whole.

The man pushed up so he was resting on his elbows. The rest of his flesh looked the same.

Why he felt like he could laugh and run and dance and sing! He set one foot and then the next under him and for the first time in thirty eight years, the man stood.

The porch around the pool that day was filled with the loudest, most joyful laughter anyone had ever heard. The man, lips stretched as wide as his smile would reach, turned to find the kind eyed, bearded man, but he wasn’t there.

The man hollered a joyful sound, scooped up his rug and dashed down the busy street. He had to find his sister and tell her how he had been made whole, in the most unexpected, surprising way.

I was reading this man’s account in John chapter five and thinking about life’s adventures. We too wait for things in life. Things we expect to happen, in the way we expect for them to happen. More often than not, I find the adventure doesn’t take me the way I was expecting to go.

The diseased man in that story was thrown a corkscrew in the life he’d probably planned. A disease that lasted thirty eight years. He didn’t want to stay that way (who would?) and so waited by the pool of Bethesda. He expected that one day, he would be the first in that pool and finally be completely healed.

But then enters Jesus.

And boy does he ever have a surprise for the man. “Surprise! You don’t even need that old pool, I’m going to heal you on the spot.”

The thing the man thought he needed most, ended up happening in the most unexpected way! He thought his plan on getting in that pool would be the one thing to give him the life he desired most of all. A whole one. And then he met Jesus and in an instant, his life was whole, and would never be the same. Jesus was all he needed.

“God never denies us our heart’s desire except to give us something better.” – Elisabeth Elliot

As you wait for the expected, watch for the unexpected. Embrace the adventure and see how God will surprise you along the way.

p.s. I just launched my author newsletter! If you’d like to keep updated on my writing and want to laugh at my dorkiness, subscribe in the pop-up when you first pull up my site. (it appears in like… 5 seconds after entering my site 🙂 )

View all posts by Rolena Hatfield