I couldn’t decide if this second blog post should be serious, writing advice, or a list of the best ice cream brands. So I went with something I learned this past summer, seeing that it applies to the above said topics. Well except maybe the ice cream brands. We’ll save that for another time 😉

I’ve always had big plans for my future.

I would grow up and shock the world in one way or another. Whether it was by writing a New York Times Bestseller, becoming a world renowned actress, or saving an African village from disease and death. I was certain the adventure would be BIG.

I was sure God would use me to make a difference, change the world and maybe even have my name, when I’m gone, named among the great men and women of faith.

But as of right now I haven’t written a bestseller, or even set foot in Africa.

So I had to ask; what if God never intends for me to accomplish those BIG dreams?! Why, I’d have to reorganize, plan and dream up a whole new future! What if that future life was simple? Nothing flashy or grand, just simple.

As I pondered this thought, I was reminded by a few simple things what a life surrendered to God, for His glory, truly looked like.

I love object lessons. A good friend just shared one with me this summer and it may be my favorite now. Cause it’s about books, guys. *excitedsqueal*

God’s creative. He’s an author. The Author of our lives. But when we think of God writing our story, we like to think that we get to be the main character. The heroine (or hero). The character everybody thinks of when the title’s mentioned and makes fan art for. After all it’s our story He’s writing, right?
The thing is though, that it’s not like that at all. It’s more like, we get the privilege of being the pages, while God, the main character, is writing out His story in our life, for His glory.

That’s what a truly surrendered life looks like. He’s writing the story perfectly in our lives, like only He could. And getting the credit for it. When I try to be the main character in His story, my perspective gets messed up as I try to steal the credit for what He’s done.

And though He could still choose to use any one of those big plans I’ve dreamed up in His story, if He doesn’t want me to pursue them right now, what should I be doing?

She Didn’t Change the World

Recently, I attended a History Festival where a few talented people created posters on heros from the Reformation. One of the posters was about a queen who stood for truth, while the majority of her kingdom was corrupted by lies. Thing is, she’s not well known (which is probably the reason I can’t recall her name :p ) and she didn’t change a lot of people’s minds.
But there was something said at the bottom of the poster that caught my attention. It said,

“She didn’t change the world, but was faithful in the small things to which God had called her.”

It caused me to pause. And I thought, am I faithful in the small things? A smile. A note of encouragement. A forgiving heart. A soft answer.

I tend to get so focused on waiting for the BIG things in life to happen, that I forget to be faithful in the small, simple seasons of life.

In Matt. 10:42, Jesus is talking to His disciples and says that whoever gives even a cup of cold water to a little one, shall not lose his reward. Think how simple a thing a cup of water is. And yet in God’s eyes, this simple thing is worth reward. To Him it’s a BIG deal.

He may not ask of me to be a missionary to thousands, or a bestselling author, or a broadway star. Nobody may even remember me ten years after I die.

That’s okay. He simply asks me to remember the cups of cold water that need to, daily, be given away. No matter what He asks of me; no matter how small it is, I want God, the perfect Author, to receive the credit He deserves.

I may not be able to be a world changer in the ways I dreamed I would, but God’s still given me a part in this world. I can still be changed by Him and be faithful in the corner of the world God’s given me. Even if the little corner is just a small piece of midwestern country. Because He’s still writing His story, and using the simple seasons to bring Him much glory.
One night this truth hit me like a lightning bolt. (that’s just a figure of speech. Ya’ll can breathe easier, I wasn’t struck by lightning) But I did literally have to stop in my tracks that night and surrender my BIG dreams and plans to the Lord. 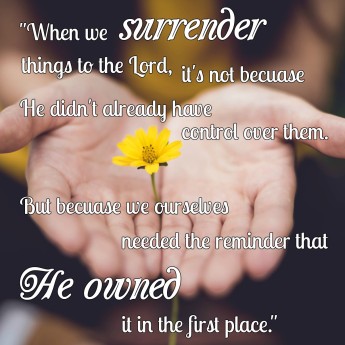 The world may not hear about Rolena, but if she’s faithful to do the things God calls her to, that’s all that will one day, truly matter.

What about you, friend? 🙂 What kind of BIG plans do you have for your life? Have you ever truly surrendered them to the Lord and been glad to serve Him in the small things? Are you trying to be the main character of His story?

Next time you think about your hopeful New York Bestseller idea, don’t forget to pause and remember, God uses the big dreams, but He will get glory from a life truly surrendered and committed to His perfect story no matter how small and insignificant some of the chapters seem.

That doesn’t mean we have to stop dreaming. 🙂 When our lives are surrendered to His perfect story, He shapes our dreams so that we are more than glad to serve Him, no matter how big or small a thing He asks of us. All that will matter to us then, is that He receives the credit due an Author’s name.

And some day, He may choose to turn that small faithfulness into something BIG like only He could. But in the meantime, choosing to serve in the small things is a BIG deal to God. After all, He’s uses even the small things, like a surrendered life, to change the world.

Do you like object lessons? What’s one small need you see that often gets overlooked in our culture?

View all posts by Rolena Hatfield

5 thoughts on “She Didn’t Change The World”